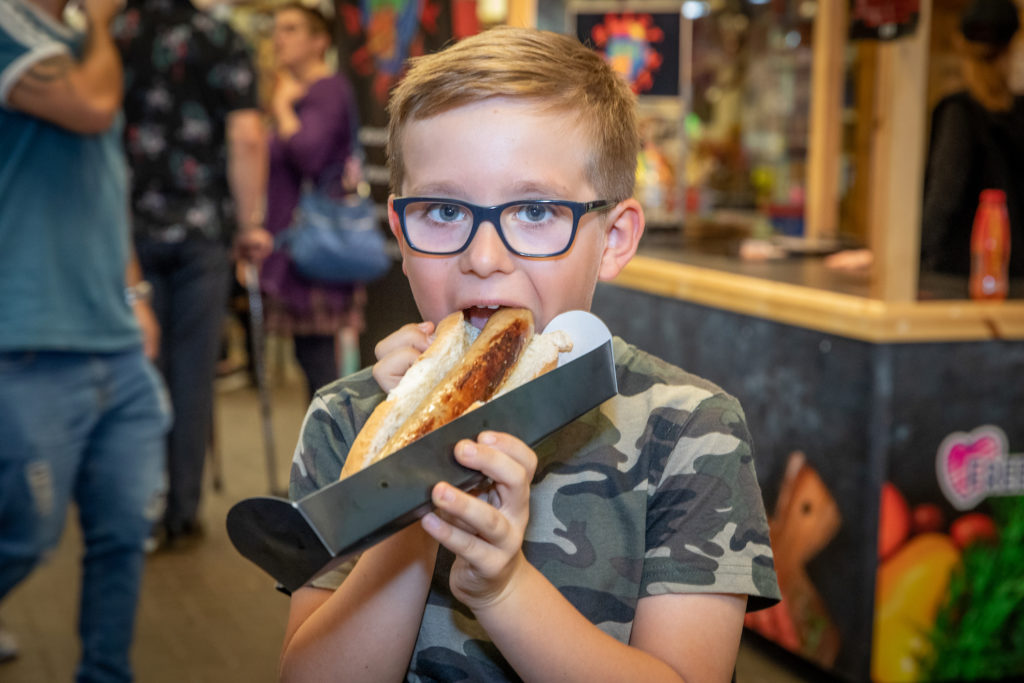 The Great Grimsby Food Fight is here to stay after the launch event left the people of Grimsby hungry for more. A collective of 14 local food market stalls, street food vendors, cafes, and chefs, along with E-Factor Business’ Food Sector Advisor Rachel Appleton, came together to feed the hungry people of Grimsby, showcasing the quality of food offering available around the area, from authentic Indian cuisine and Greek gyros to, at 30cm, the “longest fries in the world”.

Around 700 people ventured to the bustling Freeman Street Market for the inaugural gathering, which also featured performances from talented local musicians. Following incredible feedback from both the public and the food businesses, the Great Grimsby Food Fight will now be taking place every month.

On Yer Bike, who sell real dairy ice cream from their vintage-style ice cream tricycle, joined the festivities. Helen Watson, the owner of the business said: “The Food Fight is something a few of us have been talking about for a while, and it was Ruchita of Masala Masters who introduced us to Rachel at E-Factor, and she’s really helped us to get this organised and running. It’s been just brilliant. We’ve been on the market a couple of times and this is the busiest we’ve seen it.”

Rachel, who joined E-Factor as a specialist food sector business advisor, has over 18 years of experience in buying, operations and innovation at companies including McDonalds, Sealord, and Five Star Fish. She added: “The aim of the event is to bring together local street food vendors to help them to get the recognition they deserve, and to raise the profile of the already-amazing Freeman Street Market, who were the perfect partner for this launch. We have over 500 food sector businesses in Grimsby alone and by collaborating, we can shout even louder about all they do and cement Grimsby’s reputation as a great place for fantastic food and drink.”

The first Great Grimsby Food Fight has been hailed as a complete success, with many food stalls completely selling out. Beast Burger, who are moving into a permanent stall on Freeman Street Market, had many happy customers queuing for their food. Nickee Hall of Beast Burger said: “We haven’t stopped! We’ve been on the market since early August and are just waiting for our new stall to be finished, and this is the busiest we’ve ever seen it.”

Mike Hambling of The Funny Onion had a pop-up stall especially for the event. He said: “It’s been really enjoyable. I’ve got to know a lot of the food businesses here and it’s great to get everyone under one roof. And with good music too. Now we’re looking at doing pop-ups in other places too.”

Taking part in The Great Grimsby Food Fight are:

This is the latest highlight for Freeman Street Market, which is shortlisted as a finalist in the 2019 Great British High Street Awards.
You can find out more about the Great Grimsby Food Fight and the local food community on Facebook: https://www.facebook.com/greatgrimsbyfoodfight/

Contact Us
PrevPreviousE-Factor Business presents The Seaside Summit
NextWhat’s so special about Coworking?Next

Welcome to E-Factor Business
Do you need any assistance?
×
Scroll to Top